Interpersonal relations is not rocket science. It’s more complicated and there’s always something new to learn as we strive to create covenantal community here – that is, a community based upon trusting relations.

Centering Thought: Did I offer peace today? Did I bring a smile to someone’s face? Did I say words of healing? Did I let go of my anger and resentment? Did I forgive? Did I love? These are the real questions. I must trust that the little bit of love that I sow now will bear many fruits in this world. – Henri Nouwen 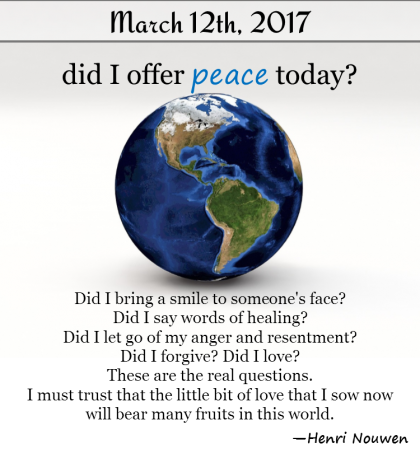 A month or so ago I was chatting with a member here who told me that when she first moved to our area she experienced something she never had in other places she had lived.  Upon meeting her, about five other women asked her if she was a Christian, and when they learned she wasn’t they pulled away.  Way to go Christian ladies!  Wouldn’t want to accidentally become friends with someone who isn’t a member of your exclusive theological club – it’s good to ask for theological credentials before you allow someone to cross the border in the realm of friendship.

Of course this begs the question – what does it mean to be is a Christian? Who gets to define this? Many who call themselves Christians say that unless you embrace certain creeds and doctrines you cannot call yourself a Christian, although there are other Christians who would say that following the loving example and compassionate teachings of Jesus is the real litmus test.  This latter view is how the Unitarian Universalist Christians among us see it  (Yes, a number of UU’s consider themselves Christians).  You (and I) are deeply inspired by the human Jesus – yours is the religion of Jesus, not the religion about him.

What if a modern day Christian somehow went back two millennia to meet the ancient prophet from Galilee and proclaimed “I am a Christian because I believe in such and such about you.” I imagine he’d say “You’re a what……??  (Jesus was a Jew who predated and knew nothing of Christianity).  My message is to trust in and return God’s love and love your neighbor, most especially the despised and rejected ones.  It’s not what you claim to believe but how you live and relate to others that matters.”

That’s how our Unitarian and Universalist forbears saw it – originally they had no intention of forming new religious movements – it’s just that they started doing their own outside the box theological thinking, and they honestly began to question three key doctrines of Christianity – 1) that Jesus was God incarnate, one aspect of the holy trinity; 2) that humans are basically sinful creatures and 3) that God was going to send the “un-elect” – the bulk of humankind – to roast in the everlasting fires of hell.  When the various Christian groups to which our forbears belonged learned that some among them were entertaining the heretical notions that Jesus was great human teacher (not God), that people were not inherently depraved and that a God of love would not damn any soul for an eternity, they were told “because you don’t believe the right way, you’re not true Christians. Unless you abandon such heretical thinking you’re no longer welcome here.”  Cherishing their freedom of conscience more than the social comforts of belonging they struck out on their own and thus began our two ancestral movements – the Unitarians and the Universalists.

At first our forbears tried to forge their own doctrines and confessions of faith but finally came to realize that for them it wasn’t going to work – they were were too independent minded to come to any lasting theological agreements. We began as free thinking heretics and couldn’t shake the habit – there was no going back.  We got hooked on the practice of not having to pretend to believe things we didn’t.

It took some time for us to realize who we are as a religious people, but finally it dawned upon us: what we hold in common is not a particular belief system but a commitment to being in right, respectful, life affirming, loving and compassionate relationships with one another and with all people.  Sometimes we use an ancient biblical word to describe such relationships – covenantal.  Simply put, for us a covenantal relationship is one wherein we vow to be true to one another in light of our highest and holiest values.

Almost sounds easy, doesn’t it? – a light fluffy religion that suggests that all we need to is be nice and polite to one another. How’s that going?

Think of your daily life – all your interactions and relationships with others – family members, friends, neighbors, fellow workers or volunteers, strangers you meet in public and beyond that, the people of this nation and our world. When I do this and self grade my own daily covenantal exam I usually come out with an A.  Sometimes an A-.  On really bad days I might make a C.   Not too bad, I say.  Got this covenantal thing nailed.

But then, sometimes the clouds of self delusion part. Uh oh.  Not sure I like what I see.  I can see how a lot of times narrow self interest Trumps (pun intended) true adherence to my highest and holiest values (so wonderfully embodied in our seven principles).  Which is to say that too often, I have had more of an “it’s all about me” rather than a loftier covenantal “It’s all about US” perspective.  At such moments of unsettling spiritual clarity I can see how fear – fear of conflict, change, challenge, and how simple ignorance, obtuseness and obliviousness and indifference and indolence too often stand in my way.  This list could go on, but you’ve seen enough.  I would prefer you not to know the full extent of my failings.  Frankly, I’m much better at seeing and would prefer to focus on other people’s failings.  That’s a lot more fun, isn’t it?   Which points to that common human tendency to grade oneself according to a different standard:  As one sage noted: “we judge ourselves by our intentions and others by their actions.” Let that insight sink in.

This insight has led me to wonder about who I am and my place in the world. Well, – there’s the inside my skin perspective and the outside my skin one – my subjective awareness and other people’s experience of me.  They are not one and the same.  For example, I don’t go around thinking “I’m a mature white male, middle class, documented citizen of the most powerful nation on earth,” but facets of that identity shape how others see me and effects the impact I have upon them.

In the past few years it has become more and more apparent that if I take my covenantal spirituality seriously then I am called not just to be self aware, but also aware of the impact I have on others – to have empathy for their experience. I don’t exist in a vacuum and I don’t exist on a level playing field – as a white middle class male in this society I have certain privileges – yet it’s not easy to see this since it has always been my frame of reference.  Or, as Marshall McLuhan put it:  “one thing about which fish know exactly nothing is water since they have no anti-environment which would enable them to perceive the element they live in.”   But I’m not a fish and I can empathetically expand my awareness to include the reality of those around me. The line from a favorite hymn – “Wake Now My Senses” – come to mind:  “take not for granted a privileged place – God’s love embraces the whole human race.”  That sings to my heart – it wakes me up to the true potential of covenantal living – being in loving, compassionate relationships with all of life.  What a path of spiritual growth that puts you on as you seek to become more deeply aware of your connections to the world around you and how you can ensure that you honor the worth and dignity of others.

Sometimes I fear that we are seen as approaching covenantal relations in a dogmatic and judgmental way such that we are seen as striving to enforce “political correctness” when we talk about such things as being aware of our privilege or lack of privilege.   Yet it is not a desire to be politically correct but rather the yearning to be truly covenantal that guides us.

Today, we have a unique opportunity to learn some practical ways to do this.