Home » Blog » Is Our UUCS Microfinance Project Making a Difference?

Thanks to the generosity of our congregation, we raised a total of $6,065 during the past year from direct contributions, Share the Plate and sales of Lao scarves.  Our funds were used to partner with The NEO Fund for microfinance projects in Nicaragua and India.

Do our micro-loans make a difference for the poor? Meet Johanna, from the Villa Vallarta neighborhood of Managua, Nicaragua. For years she sold soup on the street. Income for her family of six was about $430 per month. In early 2018, desperate to increase her income, Joanna decided to take a loan from the NEO Fund. This loan resulted directly from our contribution to the NEO Fund. She borrowed $150 and started selling produce on a table from the front porch of their home. Business was good; income increased to $1,100 per month, and she paid off her loan early. 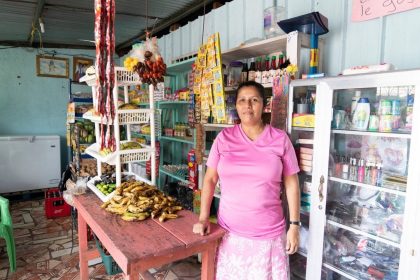 In July 2018 Joanna took a second loan, for $400. She bought a freezer and expanded her inventory to include frozen foods. Business held steady, even though Nicaragua was hit with devastating socio-economic turmoil starting in mid-2018. As the national economy took a nosedive, Joanna’s business and income remained consistent.
In October 2018 she took a third loan for $600. She bought a display case for bakery items, and begin stocking bulk staples, like rice, beans, sugar and oil. By this time, she was using fully half of her front porch for the growing neighborhood store.
In April this year, Joanna decided to transform her entire front porch for the store. She took a loan for $1,000 to make structural improvements, add shelving and expand her inventory. Joanna managed the money carefully; she continually reinvests income into her growing business, and she always repays her loans.
In October 2019 her income had increased to $1,948 per month.
We are so proud and of Joanna and inspired by her success. With coaching and four loans from the NEO Fund (which she repaid), she increased the income for their family by more than 4 times! Do micro-loans make a difference for the poor? Absolutely! In Joanna’s own words, “I used to sell a little before, but because of the NEO Fund – because of the loans – my business has increased and I am grateful!”
On behalf of the UUCS Microfinance Committee, we are truly grateful for our congregation’s support over the past eleven years, and the profound difference we have made in the lives of women like Joanna.
Ann Hanus
Chair, UUCS Microfinance Committee