BUILDING IS CLOSED for services and in-person meetings. SEE Next Service FOR Live-stream link to SERVICEs

A decade ago, the Salem Unitarian Universalist Congregation (UUCS) started a program to help address, in a modest way, global poverty. The Congregation recently received striking evidence of the success of their initial project well beyond their dreams.

The story began in late 2008 when Rev. Rick Davis gave a sermon on global poverty and challenged his congregation to do something. He had read about microfinance projects initiated by Dr. Muhammad Yunus, renowned internationally as a pioneer of the microcredit concept that uses small loans made at affordable interest rates to transform the lives of impoverished people, mostly women. The founder of the Grameen Bank in Bangladesh, Yunus and Grameen were
jointly awarded the Nobel Peace Prize in 2006.

The basic idea: Make small loans to people living on the edge, so they can increase their earning power, escape poverty, and make a better living for their families. Often, poor people are not able to borrow money to buy small equipment items or materials necessary for their businesses. Banks are few in rural areas. The UUCS microfinance project helps people that banks cannot or will not lend capital. Through UUCS donations, permanent revolving loan funds are established and then administered by credible non-for-profit organizations so funds continue to benefit poor families for many years as loans are repaid and then loaned again.

Several members of the congregation formed a committee to follow through on Rev. Davis’ 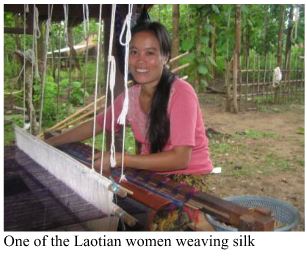 challenge. Ann Hanus, former State Economist and committee member said “the goal of microfinance is to break the cycle of poverty. It complements other efforts such as dealing with public health, violence, educational skills and important infrastructure projects. ” Committee members looked for a way to put money into a microfinance project in where they could track the results. One committee member, Carol Doolittle, retired Willamette University professor of sociology, worked in Laos. She said “While other countries in Asia were developing in the late 20th century, the people of Laos suffered war, poverty and isolation. When we at UUCS began our modest microfinance project, Laos was a ‘least developed country’ according to the United Nations and one of the poorest countries in Asia.” From her work in Laos, Prof. Doolittle knew Sombath Somphone as a well-respected community development expert in Laos and director of the non-profit organization, PADETC, an organization whose objectives coincided with the Salem Unitarian Universalist Congregation’s microfinance goals. The committee went to work and raised money. 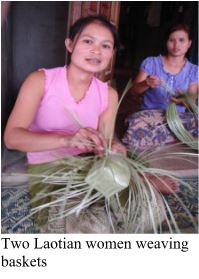 Over a period of three years from 2009 to 2012, the Salem congregation sent about $13,000 to PADETC. PADETC organized women in three villages into cooperative groups that would use their skills at weaving cloth and bamboo. The money lent to these women enabled them to buy materials and upgrade their looms. The women became more productive and increased their incomes. The women encouraged and helped each other. They were very faithful in repaying their loans with interest, thus replenishing the loan fund for additional loans, which made the women still more successful. Through the work of PADETC and an affiliated organization Saoban, markets developed for their products.

During the ten years since that project in Laos began, progress has been dramatic:

• In a country where the official poverty level was $120 per month and many urban wage
earners still earn less than $200 per month, these families’ monthly incomes from their crafts increased from under $200 per month to over $600.
• Most of the children of the borrowers have completed secondary education; some of them are 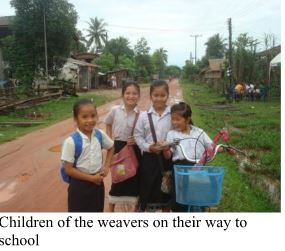 now in university.
• Many borrowers have been able to repair or extend their homes, installing new kitchens, refrigerators, toilets, water and electricity systems, even buying TVs and motorcycles.
• The status of the women in their families improved: many now are the main source of income for their families. They proudly and confidently see themselves as business leaders in their communities. In some households, the men are helping their wives deliver products to markets or collect dye materials in the forest.

The success goes beyond these families. Some local government officials and bank staff working in rural areas observed the successes in these villages and began to use these cooperative groups as a model. Banks are now realizing the viability of home-based enterprises and are now providing credit to them, sometimes with support from programs funded by the World Bank and other international financial institutions. The Laotian government is realizing the value of the handcrafts segment of its economy and is giving it more attention. Microfinance revolving loan funds as established by the Salem Unitarian Congregation are no longer the only source of capital for home-based enterprises.

There was also tragedy. Sombath Somphone was an internationally acclaimed community development worker and prominent member of Lao civil society. He worked tirelessly to improve the well-being and capabilities of the rural poor and was an active advocate for the Laotian poor and for their civil rights and democratic government. In 2005, he received the Asian equivalent of a Nobel Peace Prize. In 2012, at a police checkpoint, he was hustled into a
police pickup truck and has never been seen again.

That brings us to the astounding news. The Salem congregation had intended that its contributions would become a permanent revolving loan fund. But Saoban has just returned to the Salem congregation about two-thirds of the original contribution, to benefit other poor people in other developing countries. The cooperative groups of women have been so successful they no longer needed this source of lending. As George Struble, one of the original committee
members says, “A seed of hope was been planted and now has blossomed to provide benefits for others in need.”
The Microfinance Committee in the Salem church is justifiably astonished. Ann Hanus, the current chair of the committee, is excited; she said “We are so grateful to have had the opportunity to help these amazing women, transform their lives, and make a positive difference for families in Laos”. The Committee has also supported projects in Peru, Nicaragua, and Kenya. They will be starting a new project in India with The NEO Fund.