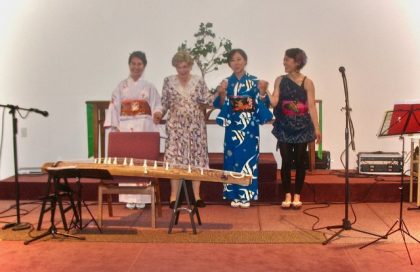 WE DID IT!! The  Benefit Concert for the Japanese Healing Garden inside OSP on August 5, 2018 was a DEFINITE SUCCESS!! This was possible Thanks to ALL of You who put in your time, efforts and support to make it happen…. and especially to those of you who were PART OF the Concert Program! Everyone did their part SO WELL and it was so appreciated by those who attended. The attendance count was about 100, plus support staff.

Melissa Michaux reports that $1465 was collected from donations and sales of inmate art and crafts…. That is a worthy contribution toward the effort to build the Japanese Healing Garden that the Asia Pacific Family Club has dreamed of and worked toward for over four long years. This Benefit Concert is evidence that the Salem community cares about and supports this project. Our personal contacts helped as much as the publicity efforts that were made, thanks to Sheryl and Pam. Thanks to club advisor Patrice Lans for bringing the arts, crafts and information from the Asia Pacific Family Club so everyone could feel a connection.

Kudos and great appreciation go to all the musicians: Masumi, Yumi, Kohgetsu, and Loraine (and the additional drummer Shoko Oba)! Your performances were stellar, and greatly admired and enjoyed by all attendees! Also, much appreciation go to our three speakers, Rev. Rick, Melissa and Trevor, who spoke so eloquently about the reasons behind this Benefit Concert, and made the Healing Garden Project something that they can believe in and give their support to.

Our UUCS support system: Before the concert could happen, we had A LOT of technical support for publicity and posters from Vicki Cunningham, Roberta Robinson and Samantha Scales, the UUCS Communications staff. We could not have had this concert without the help of the Social Justice in Action Team at UUCS (who were sponsors of this concert), Michael and Patrice Pollard specifically… who spent their whole Sunday providing whatever support we needed. The UUCS Sound/AV go-to guy John Prodhosky did exemplary service for all the musicians. Members of the Sangha group cheerfully served refreshments at the reception afterward and did KP for us.

Now, I hope we can all relax and enjoy the rest of the summer, however you choose to spend it. I think Masumi has four more concerts coming up, so she might not be relaxing too long….! Here are photos I took, although the quality is not the best. My camera does not do distance shots well. Sorry I did not take photos of some people I should have.

With gratitude to all,
Mako 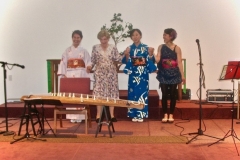 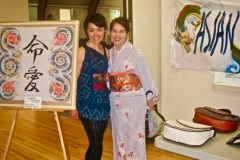 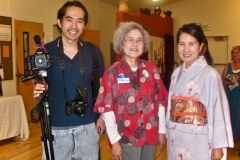 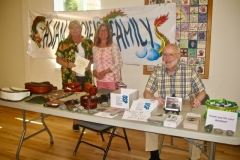 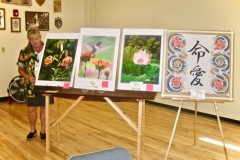 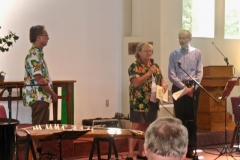 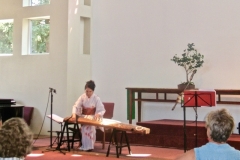 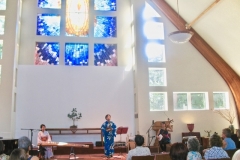 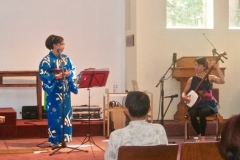 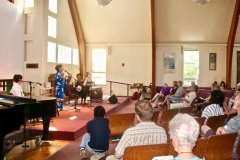 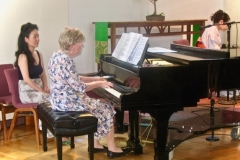 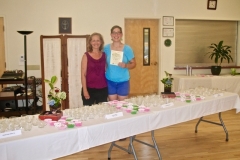 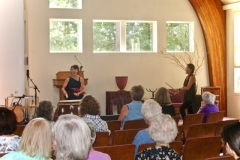 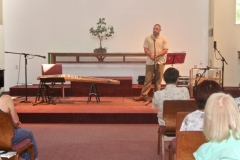