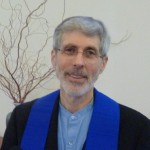 
Reverend Richard R. Davis (“Rev. Rick”) became senior minister at UUCS in 1993. He was originally drawn to Unitarian Universalism through his interest in world religions, particularly Zen Buddhism that guides his daily meditation.The UU religious movement became his spiritual home, as it promotes free and responsible religious thought, and encompasses expressions that affirm his multi-faith theology. As Rev. Rick says, “UUism put no theological constraints on which sources could inspire me in my spiritual quest.”

Rev. Rick’s personal beliefs are expansive, and include a strong sense that there is a sacred dimension to our lives beckoning us to become more attuned to this reality, whether called “God” or “The Holy” or “The Mystery Beyond Naming.”

He is inspired by wisdom from many spiritual traditions. He loves the UU tradition that has been the spiritual home of many brave souls who were not afraid to challenge the status quo, a religious movement deeply grounded in American history. According to Rev. Rick, “The litmus test for religion is whether it manifests as compassion.”

Rev. Rick observes that UU values are practical and inclusive. “Our religion is covenantal – that is, relational.” In the covenants UU’s form with each other, the focus is on the structure of our interactions, not on belief structures in our minds. Rick enjoys this wonderful congregation, affirming a shared ministry in which each member has a unique call to serve the greater good in our lives.

Personal passions include classical music, especially works of Beethoven. His irreverent sense of humor may catch people off guard. Spirituality, which he continually seeks to deepen, is at the center of his life.

Rev. Rick received his Master of Divinity from Emory University, Chandler School of Theology in 1986, and was ordained in 1987 at Emerson Unitarian Church in Canoga Park, CA where he served for six years. His duties at UUCS include worship, pastoral care, community connections, outreach, administration and teaching.

Rick’s wife Gordana was born and raised in Macedonia. Their son Zachary is a fine young pianist.