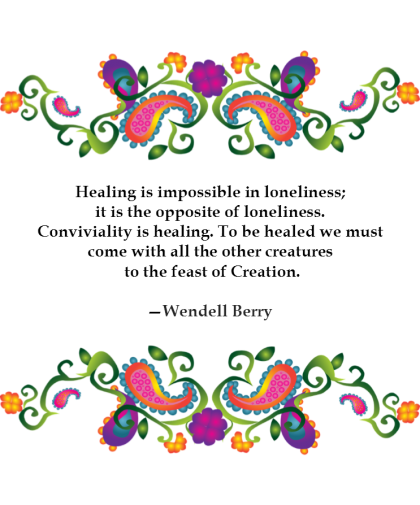 This is a multi-generational service (all ages welcome) in which we ponder upon the role of stories in our lives, including the Thanksgiving story.

Centering Thought: Healing is impossible in loneliness; it is the opposite of loneliness. Conviviality is healing. To be healed we must come with all the other creatures to the feast of Creation. – Wendell Berry

According to an old Hasidic (Jewish) story there was once a man who liked to spread gossip.

He didn’t think so much about what he was doing as he told and retold stories about others, even the ones that didn’t make others look so good.   Most of the time he never really even knew if what he was saying was accurate because he had heard it from another gossip.

Finally, one day the town Rabbi became aware of how much hurt this man’s gossip was causing others, so he met with the man and let him know the impact his careless words were having.

The man felt ashamed. He had had no idea he was spreading such hurt. Really, he was basically a good soul and so he broke down in tears and begged the rabbi for help. ‘There must be something I can do to atone for the harm I have done to others.’

“Here’s what I want you to do,” said the Rabbi.  “take four pillows out into a field. Once you are there slice open each pillow with a knife and shake its feathers into the wind.”

The man thanked the Rabbi for offering some way to make amends and rushed off to do as he was told. He purchased four fine feather pillows and cut them open in the field, watching as the feathers scattered in every direction.

“He returned to the rabbi to let him know he had completed his penance. ‘Not quite,’ said the rabbi. ‘Now go back to the field and retrieve the feathers.’

“But that is impossible,’ said the man. ‘The winds have taken them everywhere.’

” ‘It is the same with your words,’ the rabbi said gravely. ‘Just as you cannot retrieve the feathers that are blown away by the wind, so you cannot take back you words once spoken. No matter how sincerely you desire to undo what you have done, the harm caused by thoughtless speech cannot be undone.”

Now we live in a world where lots and lots of lies get spread about people – by word of mouth and in print and electronically.  Lies fly everywhere like feathers in the wind.  It’s very disturbing and destructive.   What can you do?  Here’s what I think and what all the great religious traditions teach us:  Don’t add to the lies that fly around in this world.   Know that you shouldn’t just believe everything you hear – especially unkind things said about others – so don’t repeat unkind stories you hear about others.  And when you can, check things out yourself.   Being a UU means that we check things out for ourselves because we want to make sure the things we believe are true.

We’re getting close to Thanksgiving and Which brings us to the traditional Thanksgiving Story – the one that has been told for generations.

The story traditionally told on Thanksgiving is that the Pilgrims came from Europe (the Old World) and settled in the area they would call New England in the town they named Plymouth and that they had a very hard time surviving until a friendly English speaking Native American (Wampanoag) named Squanto (Pisquanto) came and showed the European settlers how to plant corn and do other important things to survive.   Then when their abundant harvest came in they invited other Wampanoag came and they all had a great Thanksgiving feast.

And that’s the story

Or is it?   Do you suppose that something might have been left out of this story?

Well, actually historians note that quite a lot has been left out.  For example, how do you suppose the Pisquanto happened to know English?   It’s because some years earlier he was captured by an Englishman who took him to Europe to sell him into slavery.  Fortunately Pisquanto escaped and spent some time in England as he slowly worked his way back to his home on this continent.   When he returned he discovered that diseases brought by the European settlers had wiped out many of his people, including in the very area the Plymouth Pilgrims had settled in.   Not only were Native American lives lost, so was their culture and spirituality, which the European settlers called barbaric and evil.  The real evil was all the damage done to native American lives and culture because of this attitude.

So I’m sorry to say that the original Thanksgiving wasn’t exactly like we’ve been told.   A lot has been left out – particularly a lot about the sufferings of the original inhabitants of this continent.  It’s important to know about this.

Because we want to know as much of the truth as possible and we want all voices to be heard, especially those voices that have not been heard before – like the voices of Native Americans, Blacks, Women, the Poor, the children and all who are disadvantaged.

Earlier we heard the story that reminded us how lies fly like feathers in the wind.   Yet just as it’s wrong for lies to fly, it’s also wrong for truth not to have the opportunity to do fly free.   All people should be welcome and included and able to share their stories at the great Thanksgiving feasts of life.  No one should have to keep their story to themselves, to not feel that they are allowed to be who they are.