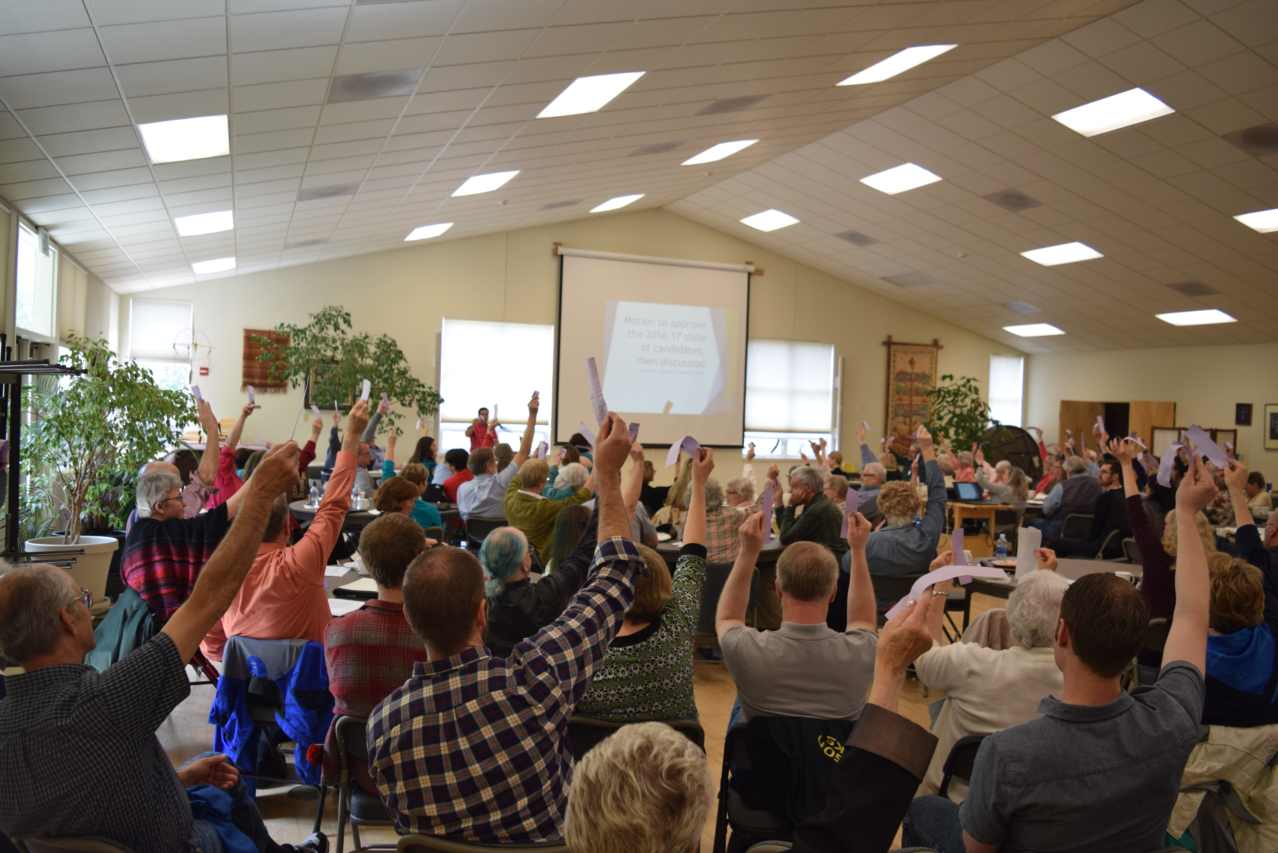 The Annual UUCS Congregational Meeting was held Sunday 22 May at 11:45 pm following the single service at 10:30 am.  On the agenda were:

Prior to the meeting, information regarding the Nominating Committee’s proposed candidates and the budget was available in editions of the newsletter, on this webpage and posted on the bulletin board in the Religious Exploration hallway.

Official Minutes of the Annual Congregational Meeting, May 22, 2016

Board Candidates
The Nominating Committee provided the following list of candidates for Board positions for the 2016-17 Congregational Year, and they were elected unanimously:

Returning Board Members not requiring a vote this year:

The total projected income for the proposed 2016-17 Budget is $303,880. Most of the income comes from pledges which increased by 5% from last year. The Budget Committee used prior history to project expected income in other categories such as the Sunday plate offering, non-pledge income, and investment income.

Chart showing how expenses are divided by category

The total projected income for 2016-17 is $4400 more than the current year’s budget. That is a 1.5% increase. Early in the budget process, the Budget Committee (part of the Finance Team) met with all of the teams to better understand their goals, and what resources they needed to further those goals. The process enhanced the Budget Committee’s understanding of the impacts of any budget reductions or new investments before the total income was known. It also improved each of the teams’ (and staff’s) knowledge of the budget process.

The goals of the Budget are to fund a 2% salary increase for all employees, fund increases in costs for essential services in Administration and Facilities, and make strategic investments in Team programs. The RE Assistants’ staff hours were increased by two hours a week, and funding was increased for Social Action Outreach, Communications, and Membership.

To accomplish this, money was reallocated among budget categories based on current spending patterns. In some cases, where a team or activity had a corresponding ‘Other’ Fund, the budget process relied on the use of both Operating Funds from the budget and Other Funds to pay for the total cost. An example is Childcare which receives Operating Funds from the budget as well as has an Other Fund that receives Share the Plate money.

This is a tight budget with virtually no contingency. Total pledge income was discounted by 2% to account for changes in membership during the year. Greater communication between the Budget Committee and the teams improved forecasting of costs and allowed the Committee to meet Budget goals.

This was a successful Stewardship Campaign. Good-faith estimates of giving for the fiscal year starting July1 are almost $14,000 greater than for the current fiscal year. There are 31 new pledgers with an average pledge of $417. There were increased pledges from 69 members and friends, averaging $309. As occurs every year, several members moved away from Salem, discontinued their participation, or decreased their pledges.

For 2016-2017 there are pledges from 186 members and friends, averaging $1,511. This is a net increase of 14 pledgers over the current fiscal year. Much thanks to the Stewardship Team of Ginny Merriman, John Prohodsky, Denise Hughes, Bob Muir. And thanks to Rev. Rick Davis and a huge number of canvassers. Thanks also to the helpers with the Saturday Stewardship Dinner and Sunday Brunch, including the Meditation Group.

2015-2016 UUCS team reports are annual reports of teams that do the work of our congregation as volunteers. These include  the board of directors,  the facilities and music teams and many others.

Reading this document gives a greater appreciation of the many people who give of their time and talent to UUCS. Thank you everyone!