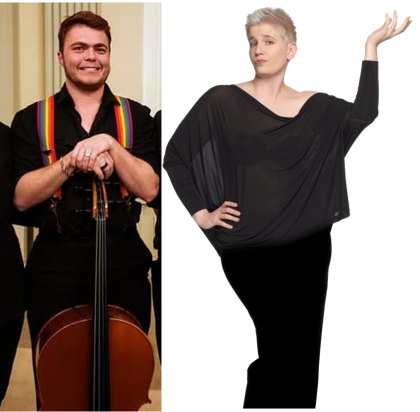 Enjoy Oregon Art song composed by queer Oregon Composers, live in concert December 14 at 7:00 pm at the Unitarian Universalist Congregation of Salem (UUCS), 5090 Center Street NE, Salem 97317. Art song is vocal music compositions, usually for one voice accompanied by piano.
The performance will be by Dr. Kit Abrahamson, baritone and Stephanie Lynne Smith, piano. Abrahamson presents his debut vocal recital singing music by 21st Century Oregon queer composers. The centerpiece is “I Am He” a ten song cycle by Evan C. Paul, originally for tenor, but transposed at Dr. Abrahamson’s request. drkitcellopunk.com
Dr. Kit Abrahamson is a queer trans musician in Salem OR. While his multiple music degrees are in composition and music theory, he also teaches cello and piano, sings in choir, conducts school orchestras, and performs on cello and piano.

Born and raised in Wichita Falls, Texas, Stephanie Lynne Smith holds a Bachelor of Music in Piano Performance Degree (1998) from the University of Colorado at Boulder and a Master of Music in Chamber Music Performance Degree (2001) from the San Francisco Conservatory of Music. She served as Artistic Director and Conductor for several GALA choruses in the San Francisco Bay Area, commissioning an opera, a musical and several works for chorus.

She was Cantor and Worship Designer for Grace Cathedral in San Francisco, and toured with Bugs Bunny at the Symphony as pianist/slide guitarist, performing with the New York Philharmonic in Avery Fisher Hall and the Los Angeles Philharmonic at the Hollywood Bowl. In January 2012, she was invited to tour with Broadway veteran Cavaliere Franc D’Ambrosio (The Godfather III/Phantom of the Opera) and they’ve been touring together ever since. Currently, Stephanie is an active performance coach and producer in the San Francisco Bay Area and Oregon’s Willamette Valley. Her Miss Smith Presents livestreams through her company SLS Artist LLC have raised over $20,000 for non-profits since shelter-in-place went into effect.

Tickets for attending in person are $20/$15 students or seniors, with a discount for a series pass. Masks and proof of vaccination or OHA exemption will be required at the door. The Unitarian Universalist Congregation of Salem (UUCS) is at 5090 Center Street NE, Salem 97317.
IF you prefer to live-stream, single concert ticket are $5, or become a season ticket holder for $43, with the links to look back at any previously performed concert.
Tickets and concert information are available at uusalem.org/celebratingdiversity/

This is the third in a nine-concert series held at 7:00 pm Tuesdays or Fridays each month from October 12, 2021 to June 14, 2022. The performances range from Native American flute to Taiko drums, to Jewish influenced Jazz and much more.
Series planner, Dr. Kit Abrahamson states, “We want to support the musical community in and around Salem. Our varied lineup will help celebrate our community’s cultural diversity with live and live streamed music.”
More information: music@uusalem.org