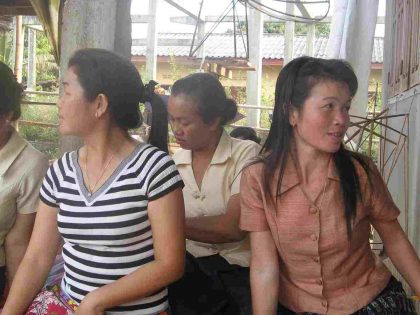 Khamkong is unmarried with no children and lives in Thaphosay Village, a twenty minute motorbike ride from Phonesong Village.  Two decades ago, her family migrated from a remote district. Almost as poor as Tiad and her husband, they had nothing when they arrived: no land and few possessions. Khamkong began silk weaving for sale when she was 18. Her father died a year later, leaving her and her mother to care for two brothers, one of them blind. Her mother hired herself out as a farm laborer while Khamkong wove. At various times, five or six nephews from even poorer circumstances came to live with them to attend school.  They all lived in a small woven bamboo walled house. During this difficult time, she and her mother were the only supports for this expanded household.

Her life changed dramatically after joining PADETC/SaoBan’s textile producer group (supported by the microfinance project) in 2006. She learned quickly and after several years developed a weaving workshop of 20 looms, hiring and training others to weave. Now her mother is no longer a farm worker. They own land and are self-sufficient in food. They have a motorbike and are gradually finishing a larger brick and mortar house. Her younger brother graduated from university and now works nearby. One nephew teaches school, and the others are completing higher education with her continued support. Bandith, manager of SaoBan, characterized her as a “model manager.”